A survey by the National Weather Service has confirmed tornado damage in two Indiana counties. 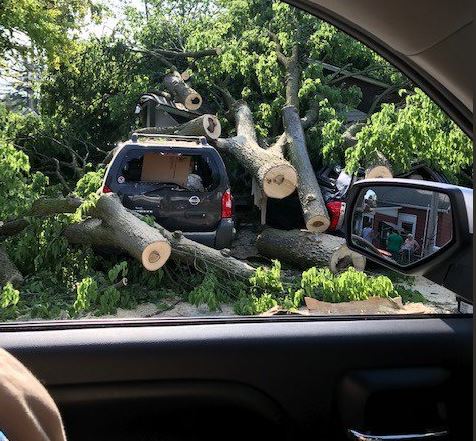 County Emergency Management spokesman Todd Harmeson says at least 75 homes were damaged, but no serious injuries were reported.  The Indiana State Police suspended traffic into Pendleton today because of fallen trees, utility poles, and downed power lines blocking roads.  It also closed the South Madison Community Schools, which have not let out yet for summer.

Christine McKain has lived in Pendleton for 20 years.  Today, she sat on her front porch with her grandchildren… as they followed orders to stay off the debris-covered roads.

“As my granddaughter said, ‘Do you feel like we’re trapped here on a front porch with a cool breeze?’ Oh, gee. Yes. We have water and we have food and we have our curiosity, so we’re in pretty good shape aren’t we?”

Harmeson tells The Herald Bulletin that the agency’s goal is to have the roads out of Pendleton open tomorrow so people can get to work.  He also says everyone’s power may not be restored by tonight.

The National Weather Service says the second tornado did damage in Henry County, south of Middletown.

The national agency says it’s investigating reports of 52 tornadoes across eight states yesterday.  Fourteen of those were reported in Indiana.

The Associated Press contributed to this report.