A little less than 2,300 people live in Fowler. The town runs along U.S. 52, just northwest of Lafayette – but still, Town Council President Linda Brouillette says there’s not much outside investment.

“We’ve done a number of things in the past few years. Some have succeeded and some have not,” she says.

The town hosts regular events every year, including a wind turbine festival and a Fourth of July fair, and there are plenty of buildings in the downtown that could house businesses or people.

But many of those buildings sit empty. Brouillette says a few have even collapsed from neglect in recent years.

“And it’s a shame because they’re awesome buildings, and all it would take is a little extra tuck-pointing and just keeping that up to date to keep those buildings standing,” Brouillette says.

One such building, the Fowler Theater, was nearly torn down two decades ago. It’s now registered as a historic landmark after a 14-year renovation.

“People weren’t going to movies any longer, no one was investing into its longevity, and in fact they were going to trash the marquee or sell it if they could,” says Dwight Snethen, president of Prairie Preservation Guild.

The Guild runs the theater, which has single showings of films each Friday, Saturday and Sunday. All revenue goes toward preservation. And Snethen says there are large bills ahead, including roof repairs.

This past weekend, the theater hosted a less conventional audience: paranormal investigators. Snethen himself is a member of 765 Paranormal, a non-profit investigative team.

“So far we’ve been successful in having groups in, coming in and leaving at least feeling like there’s something going on at the theater,” Snethen says. 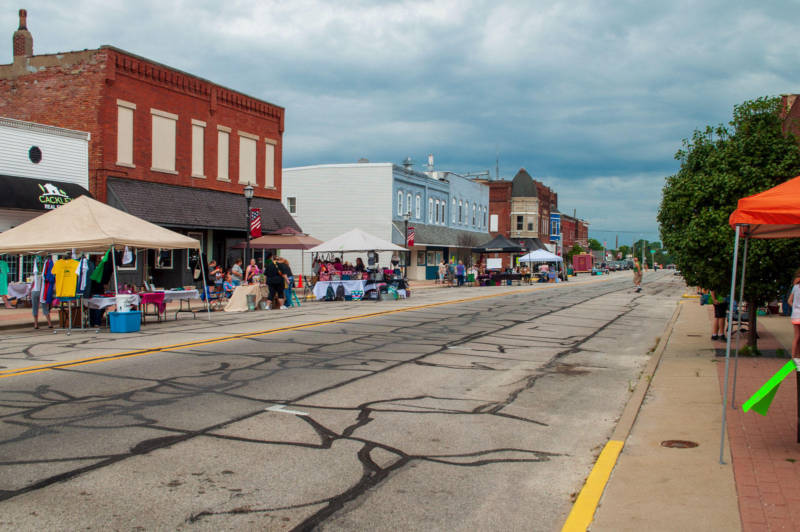 Vendors set up stalls along 5th Street for a sidewalk sale that ran alongside the convention. Credit Taylor Haggerty / WBAA News

So Snethen tried to capitalize on that with a convention, called Freak Out at The Fowler. The Saturday event featured free tours of historic locations, as well as documentary screenings. A ticketed overnight event included an investigation of the theater, the old county jail, and Fowler’s local opera house for $50 a ticket. Forty-five spots were available for the overnight stay; 30 sold.

“We are trying to help these buildings, these locations, these communities through events – paranormal events and documentaries, so that way we can do some fundraising for them and help them with their historical preservation,” says Tiffany Eakin, head investigator for 765 Paranormal.

Eakin says these conventions are growing in popularity and her organization sees that as an opportunity to aid in preserving Fowler’s past.

“Fowler has an absolutely rich and wonderful history, and I’d hate to see it just become a stop sign in the middle of a corn field,” Eakin says.

Free tours during the day had about 20 people each – spreading the word about the desire to preserve Fowler’s history. Eakin and Snethen took turns leading attendees through the theater, opera house, and the exterior of the jail. Only those who purchased tickets for the overnight event were allowed to see the inside of the jail, which has been mostly closed off since the late 1990s.

Eakin says the event was meant to provide an authentic experience to visitors, who could explore the spaces and learn the lore for themselves.

Multiple attendees did say the event was worth the trip to Fowler, and the price point was good for what the theater offered.

Cheri Durant drove from Anderson to attend the overnight investigation.

“We found this one on Facebook, and we were like, oh this one’s really going to be fun, so we came up just to do something,” Durant says.

She and a friend attended all of the events during the day – including a movie screening at the theater that evening. And Durant says it’s something she’d like to come back to next year.

“Definitely,” she says. “And I’d bring some more friends with me too.”

Revenue from the weekend’s events won’t be enough to cover a new roof for the theater, or repairs to the jail and opera house; but urban planning researcher Norman Walzer says highlighting local lore might be the right path to development.

“If there’s something in the community that makes it unique, that’s really a good approach,” Walzer says.

“If you have a variety of things, maybe each one is smaller, but you’re basically attracting a broader number of people,” he says.

The city arranged a sidewalk sale for the morning of Freak Out at the Fowler. City event coordinator Laura Burton says they were hoping to increase attendance to both events. 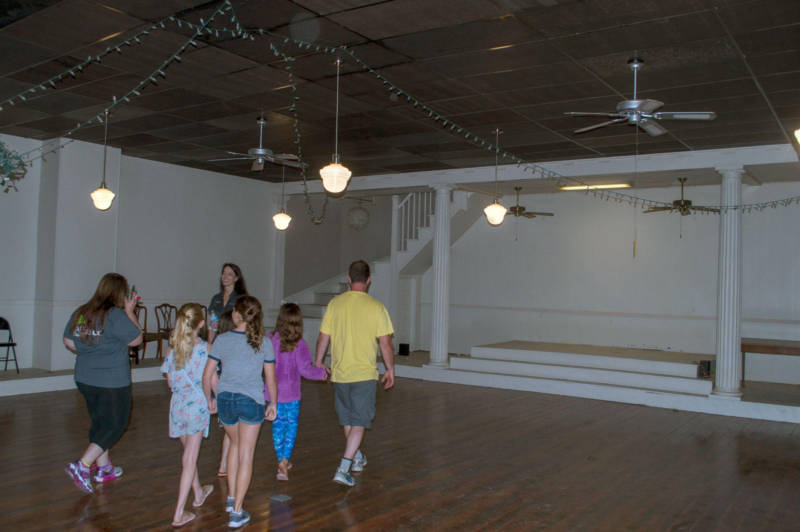 Visitors get a look inside the old opera house in Fowler, one of the sites being investigated during the Saturday event. Credit Taylor Haggerty / WBAA News

“People who come for the sidewalk sale roam over and see the theater going on, and those people do the same and come down and get the business rolling in Fowler, too,” Burton says.

Burton says the theater is all volunteer-run, and it’s something the community wants to highlight.

“In order to keep that going, we really have to raise a lot of money for it, and we just want other things in the community, too,” Burton says. “We’d love to see more historic things come about.”

About 20 vendors set up along 5th Street for the sidewalk sale – but went back inside when rain began. Though traffic increased, there were mixed results among vendors.

“This morning it’s probably been about 500% more than normal, so we are really delighted that we’ve had this much traffic,” says Prairie Belle’s Boutique owner Chrissie McCutcheon.

McCutcheon says the day brought record-breaking sales for the small shop; but she also says they benefitted from being an established business with an indoor storefront where people could stay dry.

But for vendors like Kathleen Comer, who set up tents along the sidewalk, the turnout wasn’t quite what they’d hoped.

Comer says the idea of pairing the sale with the convention seemed viable at first, but it didn’t do much for her business. And she says the city didn’t do as much as it should have to get word out about the events.

“I’m not a college deal, but I know you have to advertise,” Comer says. “I mean, there was just once in the paper.”

Town Council President Linda Brouillette concedes officials do struggle to advertise to out-of-town visitors who might come to events. She says they posted notices on their Facebook page and there were signs on the streetlamps along the street, but it didn’t extend beyond the community.

“Unless you’re driving through Fowler, you’re not going to know it’s going on. So we need to find a different way to advertise, to reach out to more people.”

Brouillette says the community is working to expand its reach. She says town officials have financed a new mural in the downtown area that cars can see from the highway, and they plan to unveil a small plaza along with it in early September.

Officials are hopeful the convention will come back next year. But neither it nor the sidewalk sale generated enough traffic to fund even the theater’s roof replacement, which is due in the next few years. And the town must still find ways to increase population and secure business investment. For that, it’ll likely need more than just event-driven visitors.