Ball State University is keeping its “room and board” rates for students steady next year, for the second year in a row.  As IPR’s Stephanie Wiechmann reports, tuition at the Muncie school will increase.

But for the second year in a row, what students will pay to live, eat, and park on campus remains the same.  Without parking, the general “room and board” rate is a little less than $10,800.

“We know that tuition makes up a significant portion of the cost, but these other expenses are substantial as well.  And so, for us to continue to constrain those costs – not withstanding the substantial increases in inflation – is a very significant sign of our commitment to affordability and access for all of our students.”

Ball State’s budget for next year, also approved Friday, assumes a class of 3,500 freshmen for the fall. 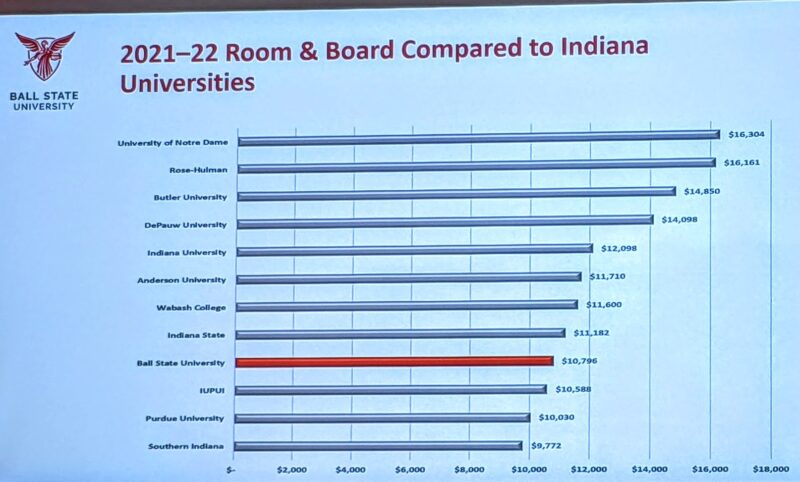 Ball State says it has the fourth-lowest room and board costs statewide. (Photo: Stephanie Wiechmann)

Not all Indiana colleges have approved room and board rates for next year.  But comparing to last year’s numbers, Ball State says it is the fourth lowest, after the University of Southern Indiana, Purdue University, and IUPUI.  As for in-state tuition this past year, it’s the fifth lowest – above those three schools and Indiana State University.

Ball State will also demolish the last wing of the LaFollette dorm complex this summer.  Mearns says the school had budgeted for that demolition for years, but kept a section open as a COVID-19 quarantine dorm during the pandemic.  The school plans to build a park and green lawn on the site.