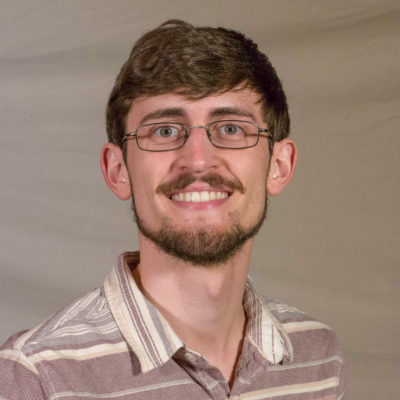 Sean grew up near Greentown, Indiana, and began working for IPR as a student producer in 2011 while completing his bachelor of music technology degree at Ball State. Not long after graduating in 2013, he came on as the Production Manager of Indiana Public Radio. He conducts the day-to-day on-air operations of the station, doing a little bit of everything from producing local shows and scheduling daily playlists to supervising student employees and maintaining the station’s various broadcast systems. Some of his favorite tasks are anything techy and geeky, such as engineering remote interviews with affiliates or recording musicians for air on IPR.

When Sean isn’t producing or doing other behind-the-scenes radio stuff, he enjoys spending his time composing music and playing guitar. He plays gigs from time to time around the Indianapolis area, and he sometimes contributes his talents to studio sessions. He also occasionally tinkers with analog audio equipment and computer systems. He enjoys regional beer, light-roasted coffee, long drives across the country, mild hiking, non-black-diamond skiing, and camping for short intervals. A few of his favorite programs include This American Life and Harmonia.