Delaware County has led the state in the last several years on meth lab seizures – it’s one of the area’s defining issues.  Some locals are fighting back with education wrapped in music.  This is the second year for Muncie’s “Make Music, Not Meth” concert series and music lessons.  But, as IPR’s Tony Sandleben explains, Delaware County law enforcement say meth may not be the area’s most dangerous drug problem anymore.

Through 90 degree temperatures and a blazing sun, musicians warmed up on the stage of Muncie’s outdoor amphitheater.  One of those is Mike Martin, a Muncie native and the lead for Mike Martin and the Beautiful Mess.  Martin helped create Muncie’s “Make Music, Not Meth” concerts, now in its second year.  He says he feels there’s been progress with meth prevention in Muncie.

“People are trying, and we’re making a difference, and there’s a lot of bad headlines still, but we are going to win this fight.”

Aimed at putting music into kids’ lives to get them interested in something besides drugs, the concerts began when meth was Muncie’s biggest drug issue. Back in 2015, officers in Delaware County found 234 meth labs. This is more than any other county in the state, even leaps and bounds above the next county on that list: Noble County. According to the Indiana State Police, 2016 brought a 35 percent statewide drop in meth lab seizures. Delaware County Sheriff Ray Dudley says that may be because of another drug.

“Without a doubt, heroin has taken over. What we’ve found is that a lot of people who was using meth, because meth keeps you up for several hours or several days, what people was doing is then they was going and getting hits of heroin to bring them down to try to balance it out. Well, because heroin is such a powerful drug, what they’ve done is they’ve shifted strictly to heroin.”

Dudley says drug popularity comes in waves. Since overdoses are much more common with heroin, studies he has seen say that there could be a shift either back to meth or to crack cocaine in the near future. Dudley also says heroin is more of an organized crime drug than meth is.  So, his deputies have teamed with the FBI in order to cut off supplies to drug dealers.

“What I’ve seen here is an opportunity to get our guys involved in something larger than just the local dealers. Instead of arresting a local drug dealer for a 20 or 40 dollar buy, now we’re able to hit a flow that’s maybe cutting off the supply for ten drug dealers here locally.” 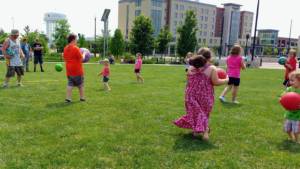 Dudley says events like Make Music Not Meth are encouraging because he sees it as the community responding to a community issue.

Pastor Carl Jones runs a ministry called Pastors with a Purpose that tries to help with issues like drugs in Muncie. Like Mike Martin, he’s originally from Muncie. Jones feels that while the drug epidemic is sad to see, a unified community can get past it.

“It’s horrifying, to be honest with you. It just didn’t feel like that 30 or 40 years ago in this community, and being born and raised here, and Mike the same way, and many of us, we just are passionate about rallying around this city and saying ‘you know what? No. We can do something different. We can affect change.’”

With heroin on the rise, Martin says that while meth may be in the name, the event is dedicated to both … as both can be dangerous.

“Both of them do the same thing. They destroy families and lives, you know? And so, those are the ones that, you know, people don’t come back from.”

Martin hopes “Make Music, Not Meth” can become an event all of Muncie can rally behind to fight drug abuse. But for now, he just hopes to get kids into music.