A bill allowing Ball State University to run Muncie Community Schools is headed to the full Senate for consideration.  As IPR’s Stephanie Wiechmann reports, Republicans and Democrats on the Senate committee moving the bill forward wanted different things from this measure, and today’s votes on amendments towed party lines.

Democratic members of the Senate Appropriations Committee proposed several amendments to House Bill 1315 that would have changed or eliminated new rules for Muncie and Gary schools, now in the hands of state emergency managers.  But with nine Republican members to four Democrats, those amendments failed on votes from majority members.

One proposed change would have limited Ball State University’s involvement with the school district to five years, ending in mid-2023.  As Democratic Senator Greg Taylor points out, the plan currently does not have an end date.

“Without this opportunity to get Muncie public school corporation back in the hands of the taxpayers and the people, and electing the board, we are doing what I believe to be something that’s unconstitutional.”

But Republican Senator Liz Brown agrees with its open-ended status.

One amendment did pass by a Republican majority vote.  It makes changes to a new appointed school board.  Of the five members appointed by Ball State, two would need to live within Muncie Community Schools boundaries.  Two other members appointed by the mayor and the city council wouldn’t stay appointed for long.  After an initial four-year term, those board positions would be elected seats.

The amendment also moves Muncie’s current elected school board to an “advisory board,” until the members’ elected terms are up.  Then it abolishes that board.

Many state senators on the Appropriations committee spoke about their support or opposition to the Muncie portion of the school financials bill considered today. But not Republican Senator Doug Eckerty, who represents portions of Delaware County.  He chose not to speak in committee. As IPR’s Tony Sandleben reports, other Muncie-area officials attending the meeting were more vocal.

Muncie Community Schools board member Jason Donati is still not satisfied with House Bill 1315.  A change in a Senate committee now allows the elected school board to finish out its term as an advisory board.  But it still dissolves that board once the members’ elected terms are up. 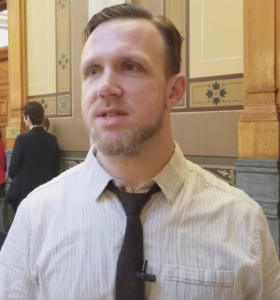 MCS Board Member Jason Donati was at the Statehouse for the Senate Appropriations hearing. He does not support the bill. (Photo: Tony Sandleben)

“Making me and my colleagues advisor…advisory roles is what it is, but I’m concerned about the fact that an appointed board will not all be made up of Muncie residents.”

Another proposed change that would have added a firm end date to Ball State University’s running of MCS failed on a party-line vote.  During the committee hearing, Democratic members talked about – but did not bring up for a vote – another possible idea: offer a referendum to Muncie voters that would end the university-school agreement after five years.

“I think if you’re going to take the vote away from people right now, you ought to be able to at least have a way by which the community could say we think it should be returned in the future. I don’t think a permanent takeover is appropriate so I’m going to continue to try to infuse that into the bill.”

Donati also voiced his displeasure with the two years House Bill 1315 allows Ball State to put a long-term plan together. He said he does not like the fact that during the most formative years of his life, his son will be, as he says, “an experiment.”

One of the bill’s Senate sponsors, Republican Senator Ryan Mishler, was not available for comment.