Purdue’s Trustees earlier this month said they would “offer” to return the gift the Schnatter Family Foundation had made to endow an entrepreneurship center within the Krannert School of Management.

Daniels says only a portion of the promised $8 million needs to be given back.

“Only $1 million of the eight had actually been delivered and it’s being returned,” Daniels says. 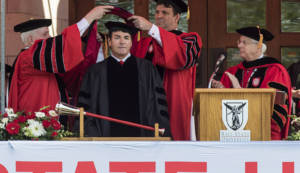 Purdue elected to cut ties with Schnatter after the pizza magnate admitted to uttering a racial slur on a conference call with company executives in May – a call designed to mitigate previous comments he’d made, including suggesting black National Football League players kneeling before games was costing him money.

Ball State University also has a business program named after its 1983 alumnus. The Muncie school says it will keep the program’s title and money, which funds several faculty and student positions.