Indiana’s private school voucher program is the largest in the country. It’s also been at the center of a debate about whether students benefit academically when they leave public schools for private ones. As Indiana Public Broadcasting’s Eric Weddle reports, a new study says they do not.

The report by Notre Dame and University of Kentucky researchers found test scores of low‐income Indiana students who use a voucher to transfer to a private school never recovered after they lost ground when transferring to a private school.

“And even by years three and four down the road, they’ve still experience an achievement loss relative to where they started in public schools and in comparison to their public school peers,” co-author R. Joseph Waddington of the University of Kentucky says. 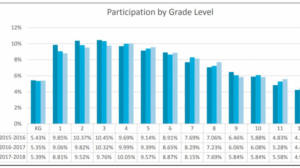 Enrollment in the Choice Scholarship Program for 2017-18.

In English/language arts, these same students had no benefit in achievement based on test scores after they switched to a private school from a public one, accord to the multi-year study.

The findings are likely to be met with praise by voucher critics and skepticism by supporters. In Indiana, the debate over the private school program has continued since lawmakers created the program in 2011. It’s been considered a possible template for President Donald Trump’s previously mentioned plan to create a nationwide program.

“Our results do not provide robust support that (Indiana’s voucher program) has been successful to date at improving student achievement for low-income students who use a voucher to switch from a public to a private school,” Waddington and Mark Berends of the University of Notre Dame write in the paper.

The study looks at around 3,300 low-income students in grades 3-8 who used a voucher to switch from their public school to a private school in 2011-12, the first year of Indiana’s voucher program.

The study did not look at voucher students who never attended a public school which makes up the majority of the program. Today more than 35,000 students used a voucher to attend a private school at a cost of $153 million.

“So what we hope that people use this as a perhaps a cautionary tale but realize that there are other questions that need to be asked before you know putting the nail in the coffin of your programs,” Berends says.

The researchers will continue studying Indiana’s voucher program. They say an understanding of non-academic outcomes, such as college attainment or social and emotional learning, are needed to more fully assess the program.

Last summer Waddington Berends released early findings on Indiana’s Choice Scholarship Program as they were undergoing final peer reviews. Since then, they say, they’ve cleaned the data and altered some approaches in the analysis.

The early results last year, first reported by NPR, found students regained the ground lost in math if they remained in a private school for three or four years. But the final report out now in the Journal of Policy Analysis and Management adjusted those findings.

In a 2017 investigation, NPR found some private schools turning away children with disabilities and LGBTQ students who qualified for the voucher program.