Ball State always had a three stage plan for replacing the existing Cooper Science Complex buildings, constructed in the late 1960’s and now called “decrepit” by university officials.  The first is the Health Professions Building currently being built on McKinley Avenue.  Once it’s done next summer, construction will begin on the Foundational Sciences Building.  It will sit between the Health Professionals Building and Ashland Avenue.

“And I think it’s worth mentioning here – this will be the connection to the Village.”

“This will, then, connect the bicycle/ pedestrian path down to the river, on through the city.  So this will be a really important, busy corner.” 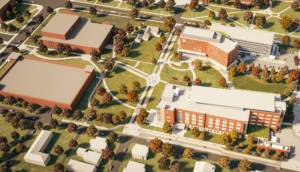 According to the architects, the building housing primarily biology and chemistry will be five stories tall and include classrooms, offices, labs, a library, and “outdoor teaching spaces.”  It will take two years to build and classes can move in for the fall of 2021.

After the two new science buildings are done, the Cooper Complex will change drastically.  Hannon says Cooper isn’t the right size and shape to fully renovate.  So, the school will demolish part of it and renovate the rest.

“Makes so much more sense to create a brand new building and build it to current sizes and shape and pedagogy.  But the building itself is decent enough for classrooms – geology, astronomy, physics.”

The university plans to ask the state legislature for more capital projects money to continue to fund the two new buildings and Cooper’s renovation.  Hannon also says Ball State will need to buy two properties it does not already own near the Village to go forward with new construction.