The Hoosier State Line will make its final trip down the tracks from Indianapolis to Chicago on Sunday. That’s after Indiana Governor Eric Holcomb eliminated $3 million in annual funding for the route in the two-year state budget that begins July 1st. As Indiana Public Broadcasting’s Barbara Brosher reports, while riders are sad to see the service go, the state says the low ridership numbers speak for themselves.

It’s still dark outside in Indianapolis as people board an Amtrak train just before 6 a.m.  The conductor says 67 people are on board.  This will be one of the last trips on the Hoosier State Line, which runs between Indianapolis and Chicago.

“It’s kind of crappy because the train is needed for transportation. Especially people that don’t have cars, you know, and need to get from state to state.”

But the Hoosier State Line’s faced problems for years. The state started subsidizing the service in 2013 after Congress halted federal funding for all regional trains.

While a spokesperson for the Indiana Department of Transportation says there have been improvements in on-time performance and services offered on board since then, ridership keeps dropping.

INDOT declined to do an interview for this story, but Spokesman Scott Manning says in a statement, “The Hoosier State remains one of the most heavily subsidized passenger rail services currently operating, with about 75 percent of the cost of each ticket sold subsidized by the state and local governments. This financial model is not sustainable in the long-term and doesn’t represent the best value for taxpayers.”

“This train has been under a guillotine in Indiana for many years. And during this time we’ve continuously told INDOT, as we’ve told the communities along the route, there needs to be investment in this route for this route to be successful.”

That’s what leaders in many communities along the route would like to see, too. 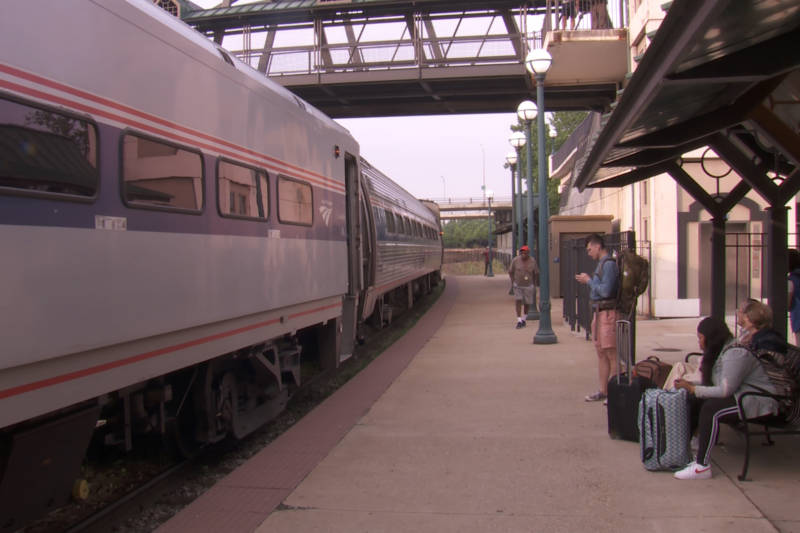 Outside of Indianapoils, Lafayette had the top ridership on the Hoosier State Line. Many Purdue students use the train to get to Chicago. (Seth Tackett, WFIU/WTIU News)

Crawfordsville Mayor Todd Barton says he understands why the state pulled funding, but sees the decision as short-sighted. Having a train from his city to Chicago has been an incentive for businesses to expand to the area.

Barton says he wants to see the state prioritize train travel by creating a department that focuses solely on passenger rail, rather than including it as part of INDOT’s responsibilities.

“Departments of transportation are really focused on roadways and moving commerce in that way and there’s really not much of a focus or even a lobbying effort on the behalf of passenger rail.”

While ridership numbers for the Hoosier State line may not be strong enough for the state, Indiana Passenger Rail Alliance Board Member Tod Bassler insists Indiana residents are hungry for more train travel.

I meet him inside the Crowne Plaza Htoel in Indianapolis, which is housed in a portion of historic Union Station.

It was actually the first Union Station in the country when it opened, and at times had as many as 150 trains arriving and departing per day.

The small Amtrak and Greyhound hub across the street is a far cry from what Indiana train travel once was.

“Here we are crossroads of America, right in the middle of everything, we really need to pick it up a notch in order to be competitive compared to our neighbors here in the Midwest.”

Basler says he’s encouraged to see the state investing in the South Shore commuter rail in northern Indiana, and hopes the same can happen elsewhere in the state.

“What I really want to see here is improvement for central Indiana, and for the south of Indiana, as well. We’ve regularly spoke about what we call an inverted Y, which would be a daily, reliable service between Cincinnati, Indianapolis, Louisville, Indianapolis, Chicago.”

But a robust expansion is hard to imagine with service from Indianapolis to Chicago getting scaled back.

Once the Hoosier State ends, people can still take the Cardinal Line from Indianapolis to Chicago. But that train originates in New York and only runs three days a week.