An Indiana museum is tackling an issue that’s hit the Midwest hard – the opioid epidemic. As Side Effects Public Media’s Carter Barrett reports, an exhibit in Indianapolis tries to combat misunderstandings about how opioids affect our bodies.

The Indiana State Museum’s new exhibit is called “Fix.” Inside there’s a small kiosk with a monitor playing first-hand accounts of people who have struggled with addiction.

One of them is Jose Ramos, a former anesthesiologist.

“No one ever decides one day you know what, I’m gonna wreck my life and then destroy my career. I’m gonna destroy my marriage,” Ramos says. “I practiced 10 years without a hitch, until the pressure started getting to me and one day I thought, you know, ‘Just this once.'”

Ramos, who’s now 55, had access to drugs at work. Soon, they had a powerful grip on him.

“Imagine someone holding your head underwater and you’re drowning, you’re desperate for breath,” he says. “That’s how desperate you are.”

After a year and half of using opioids like morphine and fentanyl, he was caught because he left a vial and syringe in a staff restroom. When he returned from rehab, Ramos was convicted on drug charges and lost his medical license.

That was extremely painful, but now Ramos wants others to learn about his journey. “I thought: ‘I need to share this because there is hope. This is a disease, it is treatable.'” 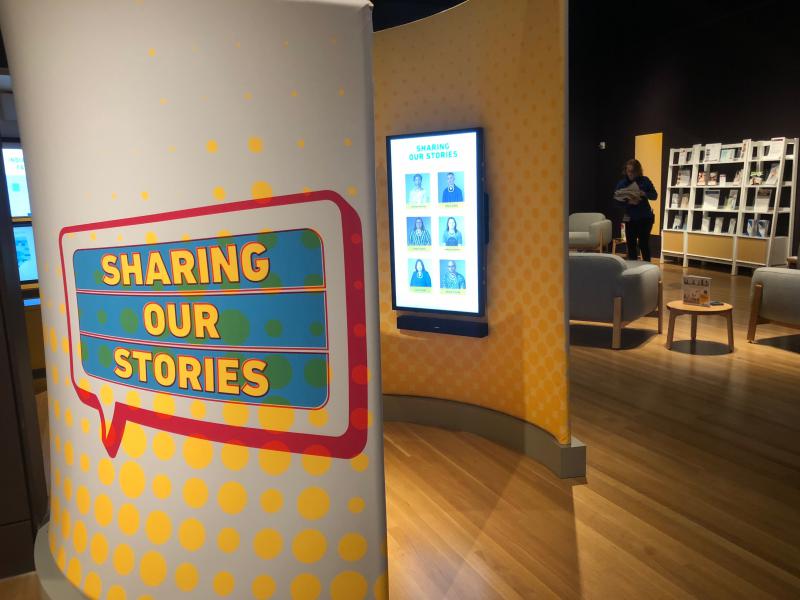 The kiosk where museum-goers can hear personal stories of people impacted by the opioid crisis. (Photo: Carter Barrett)

Dozens of people have shared similar stories for the exhibit. Museum CEO Cathy Ferree says that’s essential for people to understand this crisis.

“Hypotheticals in this particular situation are not authentic,” she says. “We also spoke with some young people who said, ‘Don’t tell us ‘Susie something something’ because we don’t really want to hear that, we can’t relate to that.'”

The exhibit also has art installations, games that explore cravings and a giant canvas brain.

“We went with bright colors to really lift up the sort of visuals of the exhibit so that it’s bright,” exhibit designer Brian Mancuso says. “It’s not dark and it’s not in the recesses. It’s not something to be shameful of.”

Mancuso says the museum reached out to over 35 groups for advice. They wanted to make sure the exhibit’s design didn’t further stigmatize addiction. He says it strives to show that substance abuse is a disease, not a character flaw.

“Current events exhibits are always super hard, it’s always a moving target,” he says. “It’s easier to talk about something that happened 100 years ago or 10,000 years ago.”

Ferree says the museum can help people understand substance abuse and how it plays out in Indiana. And providing this sort of context and resources is critical for the future of museums, especially during the Internet age.

“In a museum experience we’re no longer the place to be quiet, we’re a place to talk about the piece of art on the wall,” Ferree says.

On Fix’s opening day, Randy Davis drove an hour and a half to see the exhibit. He runs a recovery support group in rural Indiana.

“It’s got a little bit of the history, it’s got the present,” he says. “We still haven’t found the answer how to eliminate the future we’re going to have with this. But I think it gets the mind and heart stirred by the personal aspect with the videos.”

Ramos says the personal stories highlighted in the exhibit show how people can overcome addiction.

And this gives him hope. “If you are able to recover from this disease, you are going to be a superhuman.”

He plans to start a new career in psychotherapy and addiction counseling.

The exhibit, on display until February 2021, is free to visit.