The police department in Anderson says it will soon buy body cameras for officers and in-car dashboard cameras.  As IPR’s Stephanie Wiechmann reports, that’s after a citizen video showed an Anderson officer using a chokehold during a weekend arrest, two days after the department banned the move.

“It also allows the folks to see what really did happen, so it’s transparent for the public.  And at the same time, it also protects the officers against allegations of misconduct that, in fact, didn’t occur.” 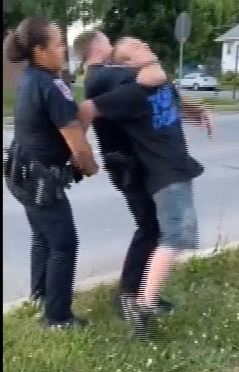 Over the weekend, Spencer Nice was arrested by officers Brandon Reynolds and Ashley Gravely, on suspicion of throwing something against a building wall.  Video from Nice’s girlfriend shows Reynolds using a chokehold to control Nice.

Broderick says the arrest happened about 30 hours after the police department banned such chokeholds.  He says the officers should have read about it in an email from Chief Jake Brown by the time of the arrest.

“Under our local rules that we have in our department, police officers are required to look at their department email and read it at least once every day.”

Broderick says both officers, which have been with the department for more than five years, have been put on leave with pay during an investigation.  He says Nice and his family are cooperating with that effort.  But Nice has told the local newspaper he wants to file a formal complaint and demand the officers be fired.

Chief Brown says before they were banned, chokeholds were “very rarely” used in his department.

“In short, we had other equipment, other options, and other tools that would more than likely be used well more often than a chokehold.  But, some of those tools cannot be applied if you are in close distance, if you are chest-to-chest, side-by-side with someone.”

Broderick calls buying camera systems for the police department an “expensive proposition.” Brown says there is no money in the current budget to buy the technology, and he will likely have to ask for a one-time appropriation.  No timeline was given for the purchase.