The city of Muncie has announced a proposal on how to spend the more than $30 million it is receiving from the federal American Rescue Plan, designed to help locales recover from the effects of the COVID-19 pandemic.  As IPR’s Stephanie Wiechmann reports, the city is taking federal guidance to help the tourism and hospitality industry seriously.

Muncie will receive $31.7 million over two years – and that money must be spent by the end of 2024.  Muncie Mayor Dan Ridenour says the city’s first portion is already in the bank.  Muncie is among the first cities in the region to introduce a plan.  Ridenour says that’s deliberate.

“I know all these cities and towns are receiving these funds.  And there’s a struggle right now to get contractors to do work.  So I felt that the earlier we could get started with our plan – get it through the council, get the money appropriated and spent – the more likely we are to get contractors to actually do the work.”

Read the plan here [PDF] or scroll down for a list of allocations.

Some of that money is slated to pay the city back for budget shortfalls in 2021 through 2023.  There’s some earmarked for infrastructure projects, neighborhood associations, public art projects, and a future in-patient substance abuse center in some form.  As Ridenour says:

“I’m going to say it a third time: we want in-patient … in-patient rehab services located in Muncie, Indiana.  And we’re setting aside $2 million to help solve that issue.  I don’t know if $2 million is going to be enough, but I’ve already been told from a meeting this morning that I had with somebody that they may be able to match that.”

Ridenour reminded the audience that the money can’t be used for roads or sidewalks.  It can be used for sewer, water, and broadband projects.  Officials say the city engineer will take the lead in how best to allocate the $7 million slated for infrastructure.

Many of the other categories will give money to businesses directly – especially hotels, the convention center, tourism generators like Prairie Creek Reservoir and Ironman Muncie, small businesses, and restaurants.  As for which businesses and nonprofit organizations get that money, that will be up to locally-formed committees made up of non-elected officials, says Muncie City Council President Jeff Robinson.

“These committees will hold public meetings and working sessions, and will allow for the public to offer input to the committee chairs.  We’re prepared to move quickly to assemble and get to work setting eligibility guidelines to get this money in the hands of people who need it right now.”

The plan requires city council approval and committee members then need to be chosen.  City officials are scheduling a public forum to hear community input next week and two council meetings in June, including a specially-called session to pass the plan as quick as possible.  Robinson says he hopes to be able to cut checks to approved businesses “before the end of the summer.”

Indiana counties are receiving their own funds and making their own plans.  Delaware County has not released its proposal yet, but city officials say they’ve collaborated.

In addition to the $31.7 million, Ridenour says community development will be getting an additional $1.8 million from another federal source that must be used to serve the homeless or those at risk of homelessness.  That money has not arrived yet.  But the mayor says it could be used to purchase and rehab properties or build new things.

What comes next?  Public meetings on the American Rescue Plan Funds Proposal: 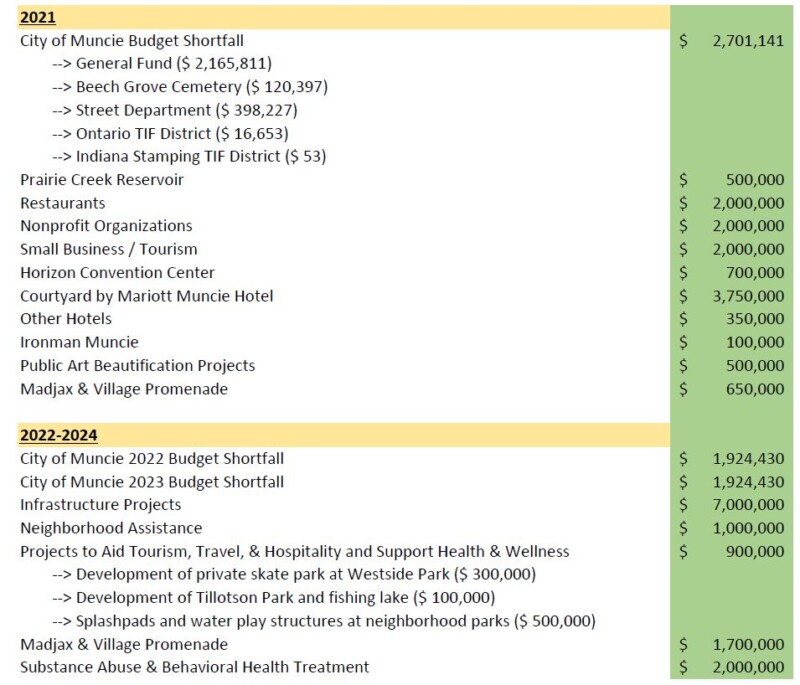