Carmen Gober never planned to homeschool. But in the final days of this summer break, she worried that her son AJ’s school had a dire staff shortage — so bad, it might not be able to function.

Five-year-old AJ has cerebral palsy and he doesn’t speak. His northwestern Indiana school serves students with emotional and developmental disabilities. Many of his classmates use wheelchairs.

“My biggest thing is safety,” Gober said. “If there’s a fire in that building, how do you evacuate all of those kids?”

Schools across the country struggle to hire enough special education teachers and paraprofessionals. The shortage is so severe at AJ’s school that parents and educators say it’s dangerous. They blame the problem on years of low pay and a reliance on inexperienced and unqualified staff.

AJ’s school is run by Porter County Educational Services, a system that manages special education services for the seven school districts in the county. The agency is responsible for hiring special education teachers and educating about 4,200 children with disabilities — more students than almost any other school system in Indiana, according to the latest state data.

AJ goes to the Special Education Learning Facility, or SELF, a school for students with extensive support needs that is run by PCES.

When school began last month, Gober was so concerned about vacant positions she decided her family had no choice but to homeschool AJ, even though it meant he missed the physical and speech therapies he is legally entitled to as part of his individualized education program, or IEP.

Gober’s mother quit her job in home health care to stay with AJ during the school day.

“I feel like the public education system is failing him,” Gober said. “And it is unfair.”

A struggle to hire

Porter County administrators scrambled to fill vacancies before the year started at SELF. The school system offered special education teachers at other Porter County schools $3,000 extra to move to SELF, according to a letter parents shared with WFYI.

And the whole PCES system — including neighborhood schools — is short-staffed.

“I think we are barely hanging together for the special ed division,” Zecevich said last month. “We have teachers leaving left and right.”

It’s unclear exactly how many openings remain at SELF because Bodnar did not answer specific questions from WFYI about vacancies. Instead, she wrote in an email Sept. 6 to WFYI that all positions are “currently covered” by licensed personnel.

But those positions could be covered by substitute teachers, according to a spokesperson for PCES. To be eligible for a substitute teaching license in Indiana, teachers don’t need training in special education. All they need is to be 18 years old and hold a high diploma or equivalency.

At a meeting Sept. 6, Bodnar told the school board that PCES has more than 20 openings.

“Our goal is always to provide the most qualified staff available for our students, which sometimes means transferring staff,” Bodnar wrote. “While the entire nation is dealing with an unprecedented teacher shortage, especially in special education, Porter County Education Services continues to recruit and hire for open positions.” 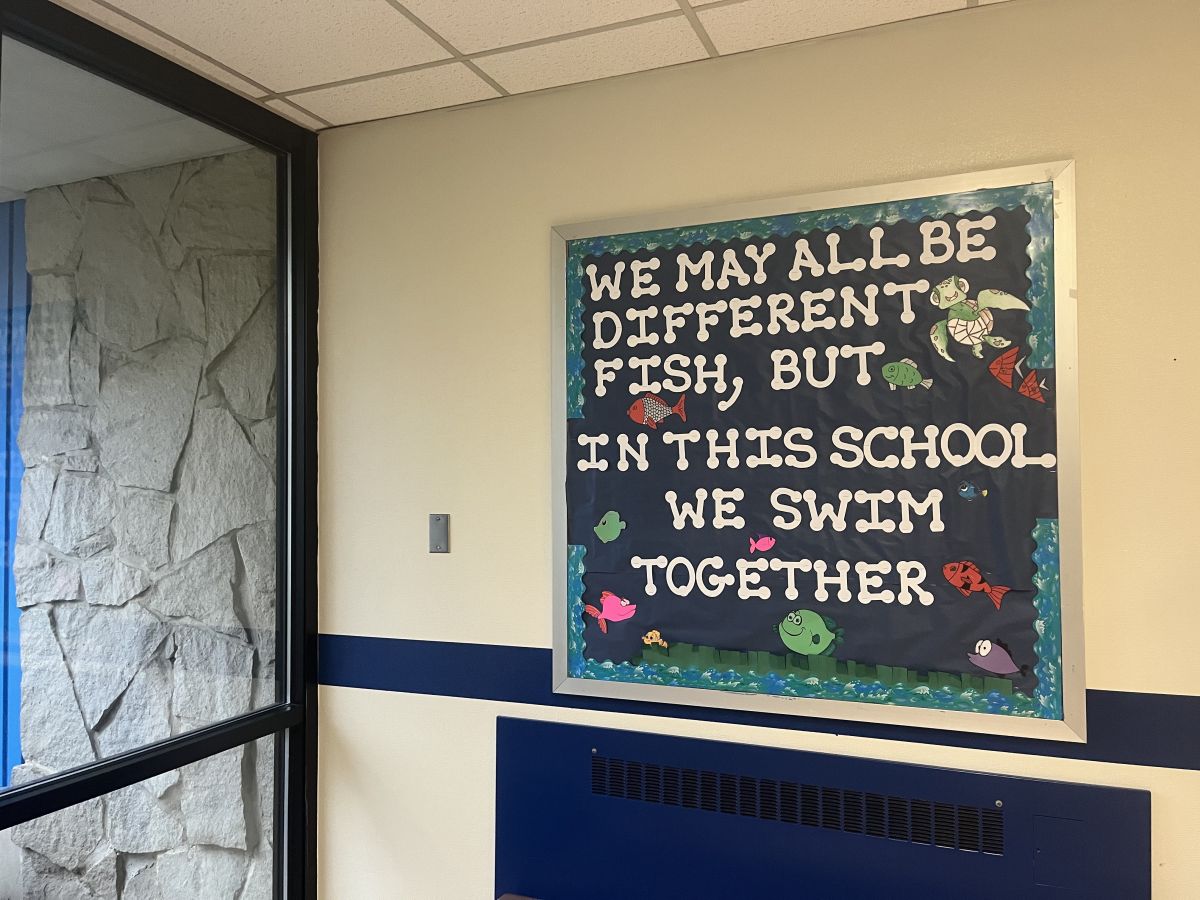 A sign located in the hallway of the Special Education Learning Facility, known as SELF school, in Valparaiso, Ind. The school is operated by Porter County Education Services, a special education system that provides services to about 4,200 students with disabilities in northwestern Indiana. Lee V. Gaines/WFYI

The superintendents of the seven participating districts make up the board of PCES. At a meeting in early August, the board only briefly touched on the staff shortage and frenzied effort to hire teachers for SELF.

Teachers, however, delivered searing criticism during a public hearing ahead of teacher contract negotiations.

“This building is not a safe building because we are not adequately staffed,” Zecevich, the union leader, told the board. “It is amazing to me that there has not been something that has happened to this building that has been an emergency because of your lack of staff. It’s just a matter of time.”

Zecevich, who has taught more than 40 years, told the board that one of the main reasons the school system loses teachers and struggles to hire is low pay.

She and others said some special education teachers are paid thousands less than their peers with comparable experience in general education.

“You all put us in this situation because you decided to be very frugal with your money when it came to our salaries,” Zecevich said.

In Porter County, teachers who educate students with disabilities — even those in neighborhood schools — work for PCES. As a result, they have a separate contract from general education teachers.

Porter County includes some large, relatively affluent districts, such as Valparaiso and Duneland schools, as well as the more rural areas of East Porter County, Union Township, Porter Township and Boone Township. Portage Township schools has the highest enrollment of all participating districts and the highest concentration of students from low-income backgrounds. In addition to providing special education services, PCES runs the Porter County Career and Technical Center, which offers vocational programs.

Special education teachers in PCES make salaries under $45,000 per year on average, about $13,000 less than teachers in other Porter County schools, according to the latest state data. Average teacher pay is driven by several factors, including the experience of the educators on staff. The minimum salaries in PCES are lower than some Porter County districts and higher than others.

The teachers union and school system are currently negotiating salaries for this school year, which could result in pay increases.

As it stands, teachers say that many special educators would get a substantial pay bump by moving to a general education job.

“If anything, these are teachers who should be rewarded, not punished,” he said. “Given the challenges that these students present, they should be getting the best teachers.”

Parents and educators say special education teachers assistants are also poorly paid, despite the fact that they play a crucial role in the education of students with disabilities.

Gober, the mother of 5-year-old AJ, said that her son’s classroom at SELF typically has three or four assistants — also called paraprofessionals — in addition to a teacher. This school year, she said she was told his classroom would have one teacher and one assistant. Bodnar wrote in an email that she cannot comment on a specific classroom without knowing which one it is. She said the number of paraprofessionals per classroom depends on the needs of the students in the room and that hiring teaching assistants is a priority for PCES.

Gober said one assistant for multiple children with disabilities isn’t enough to give her son the one-on-one attention he needs.

“How are you meeting their needs when you have one teacher [and] one para in a classroom that historically would have four to five [adults] in there,” Gober said.

PCES raised minimum pay for paraprofessionals from $10 to $12 per hour last year. Bodnar said she believes this is a competitive hourly wage.

But in nearby Michigan City, an opening for a special education teachers assistant lists an hourly wage of $15.50. And in a hot job market, school districts around the state are competing with higher paid jobs in fast-food, warehouses and retail. 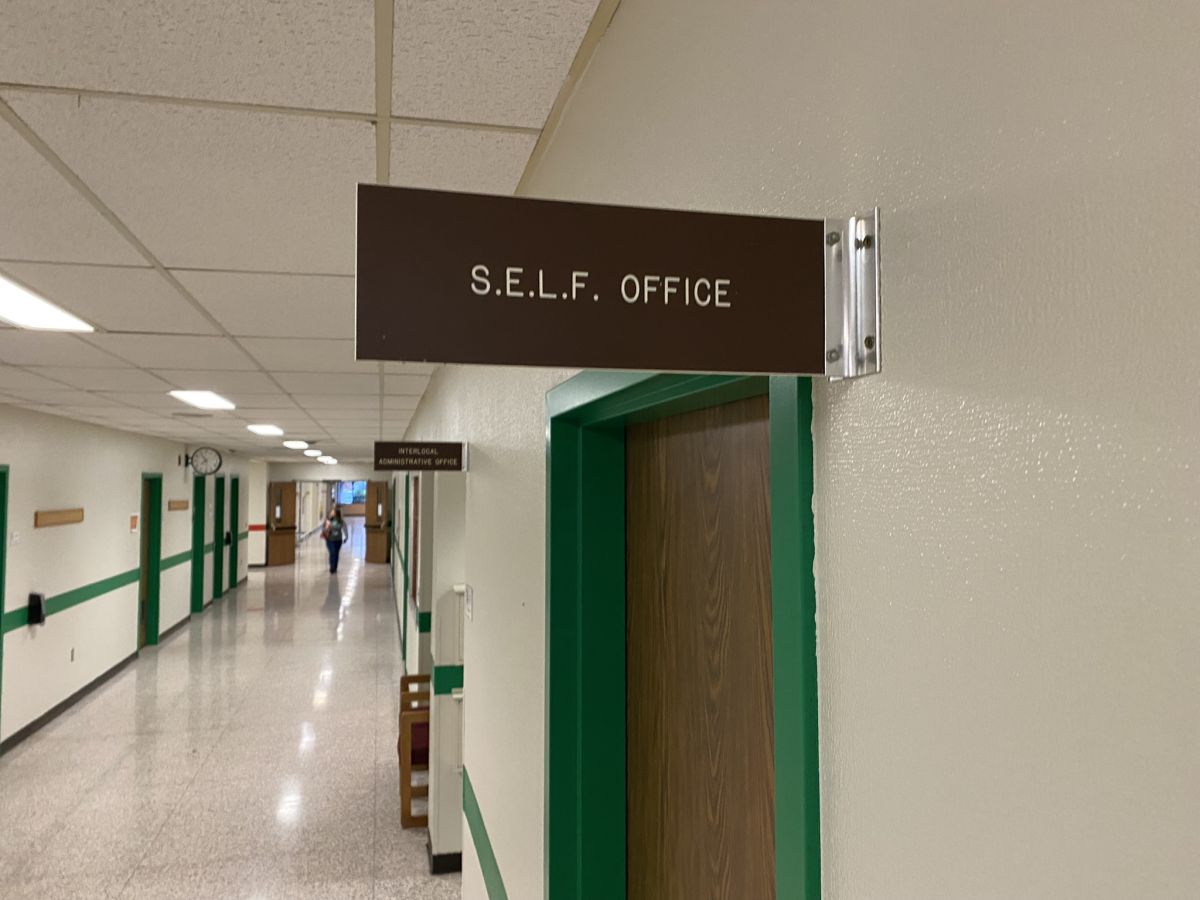 The Special Education Learning Facility, known as SELF school, is located in Valparaiso, Ind. It exclusively serves children with developmental and emotional disabilities and is operated by Porter County Education Services. Parents and teachers say SELF school is so understaffed it is unsafe. Dylan Peers McCoy/WFYI

Indiana banned the use of emergency permits for special education beginning this school year because the practice violates federal law. That means that special education teachers on temporary permits must at a minimum be in training.

Teachers say that because PCES has so many vacancies and untrained educators, low pay is paired with high workloads. Special education teacher Debbie Clifford, who works at Valparaiso High School, told the PCES board those issues fuel teacher and staff turnover.

“Each year we’re asked to do more and more with fewer trained staff and no monetary compensation,” Clifford said. Teachers are assigned to work with more students, and “these mounting caseloads make it difficult to provide quality services to our students that they need and deserve to be successful.”

Indiana doesn’t have staffing minimums for schools. The state education department says it’s up to districts to decide how many adults they need. They say parents of children at SELF who are worried can ask for them to attend a different program.

That’s what Gober and her husband did. They want to put AJ in a neighborhood school with a less severe staff shortage.

They kept AJ home from school while they waited for a response from the school system. But he struggled.

“He just needs to be around other kids,” Gober said. “He needs to be, you know, running around. Because he does seem sad.”

So, a few weeks into the school year, they put AJ back in SELF.

CORRECTION (Sept. 19, 2022): This story has been updated to include additional information from Porter County Education Services. Prior to publication, WFYI asked PCES how many teachers volunteered to transfer to SELF this year. PCES did not answer the question. After this story was published, a PCES administrator informed WFYI that one teacher voluntarily moved to SELF this year.

An earlier version of this story included a comment from PCES union president Danielle Zecevich, who said no teachers volunteered to move to SELF.