Senators Eddie Melton of Gary and Karen Tallian of Portage met today with a group from Gary that came by bus to the Statehouse to protest House Bill 1315.

They object to a bill provision that would turn Gary Community School Corporation’s school board into an advisory committee and limit how many times members can meet in an official capacity.  Melton agrees, saying it’s unnecessary to add more restrictions to a district already in an emergency manager’s hands.

“The state is telling our local elected officials they can’t make decisions and they can’t hold meetings to update our community, taking away our voice and our vote.”

For Muncie Community Schools, the bill would let Ball State University take responsibility for the running of the district in what would be a first for the state.  That plan would replace the existing school board with a board appointed by Ball State. 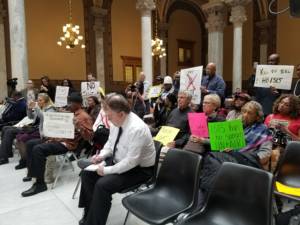 Signs point out what the Gary group opposes in HB 1315. (Photo: Tony Sandleben)

Tallian is a member of the Senate Appropriations Committee, which will vote on whether to send the bill on to the full Senate.

When asked how the measure could get her vote, she said the committee needed to send it to a study committee.

In previous committee hearings, bill author Republican Representative Tim Brown has given a list of offenses he believes the boards of Gary and Muncie have committed that led him to write the bill.  They include deferring maintenance on Gary school buildings and misspending bond money in Muncie.

More than three hours of testimony was heard on the bill in the Appropriations committee last week.  This week, it did not appear on the agenda for further discussion.