Indiana utilities have more influence on politics in the state than you might imagine. Net metering is a good example.

It’s the credits people with solar panels on their roof get for delivering extra energy back to the grid. A lot of people like it. It makes solar more affordable. But those credits are getting phased down this year. The fact that utilities don’t like it could be the reason.

He had solar panels installed on this storage barn in 2015. Bacon said back then, his family’s energy bill was about $600 to $700 a month.

“This is all electric out here. We’re so far out there’s not enough of us to warrant bringing a gas line any farther,” he said.

Now Bacon’s bill is around $160 for the whole year. He also feels like he’s doing something good for the environment.

“I’m not an environmentalist as people would say, but I’m not against people doing what we can. Everyone should do as much as they can,” Bacon said.

Bacon said he wouldn’t have done it if it weren’t for the credits he gets from net metering and federal tax credits at the time. 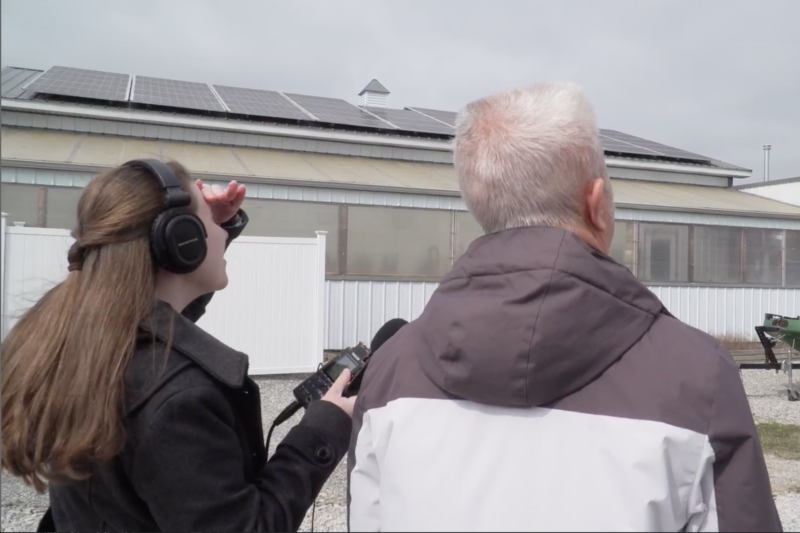 Solar panels take most Hoosiers about 12 years to pay off. With higher net metering rates going away this year, it’s likely that payback period will get even longer — and discourage people from going solar.

But rooftop solar is something a lot of people support. Environmentalists like it. It gives rural residents energy independence. It helps businesses meet their climate goals. It creates jobs. It’s also slowly become something both Democrats and Republicans can agree on.

The law to phase out higher net metering rates passed in 2017. Since then, lawmakers have proposed at least seven bills to overturn or change it. Half of them got bipartisan support.

But none of them even got a hearing. Which begs the question: Who doesn’t want net metering? The answer: Indiana utilities.

Danielle McGrath is the president of the Indiana Energy Association — a trade group that represents utilities.

“Wind and solar are great. We acknowledge that, we support that, but not to the economic detriment of the majority of our customers who either can’t afford it or who do not want it,” she said, speaking at a meeting of the state’s 21st Century Energy Policy Development Task Force.

When you pay your electric bill, most of that money goes to build and maintain things like power plants and lines. But if you get solar panels and deliver more energy to the grid than you use — McGrath said those costs could get shifted onto your utility’s other customers.

As of July 1, 2022, net metering will be phased down from the higher retail rate to the lower wholesale rate plus a 25 percent premium. McGrath said utilities purchase energy from the grid at the wholesale rate — without that 25 percent.

But some critics say utilities’ problem with net metering has less to do with customer fairness and more to do with profits. Leah Stokes researches climate and energy policy at the University of California, Santa Barbara.

“In the vast majority of places you don’t get to choose who is supplying your electricity. And so if you decide to put solar on your roof, you begin to undermine that monopoly status,” Stokes said.

Even though more people have solar panels than ever before, they still make up a very small percentage of utility customers.

Take Ron Bacon’s utility CenterPoint for example. Of their roughly 145,000 customers, only about 0.6 percent of them had solar panels or a wind turbine last year — according to data from the Indiana Utility Regulatory Commission.

Meanwhile, Indiana utilities have been working to harness their own solar energy. In fact, utility-scale solar farms doubled the state’s total solar capacity from 2020 to 2021.

But utilities weren’t always worried about net metering. Stokes said they didn’t expect rooftop solar to catch on. The law that initially allowed it in Indiana passed almost unanimously in 2004. By 2017, Bacon said utilities were working hard to get rid of the incentive.

“The last two or three weeks of the session, I think they hired every lobbyist that they could find in Indiana,” he said.

Utilities have a lot of pull at the Indiana Statehouse. Since the start of 2017, Indiana utilities and utility groups have spent more than $3.5 million on lobbyists to represent their interests. Duke Energy spent the eighth most of any group in the state. The Indiana Energy Association ranked 11th.

Over time, utilities have also donated $70,000 to the chair of the Senate utility committee’s campaign and $50,000 to the utility chair for the House.

All of this makes it harder for solar advocates to be heard. Energy policy researcher Leah Stokes said the fact that bills advocating for rooftop solar are getting more bipartisan support shows progress — but it might take hearing from more everyday people to get them passed.

“It’s really important for people to write to their state representatives, state senators and say, ‘I want solar to be an option in Indiana. I don’t want you to make it even harder for me and my neighbors to go clean and green,” Stokes said.

Join the conversation and sign up for the Indiana Two-Way. Text “Indiana” to 73224. Your comments and questions in response to our weekly text help us find the answers you need on statewide issues, including this series on climate change and solutions.

We reached out to the lawmakers that chair both state utility committees, neither could be reached for comment.