Muncie Community Schools is one step closer to securing a multi-million dollar loan from the state to pay back misappropriated bond money.  As IPR’s Stephanie Wiechmann reports, the state board overseeing the once-“distressed” district gave its approval for the loan request to move forward.

Former administration officials at Muncie Community Schools used 10 million dollars in bonds that were supposed to make building repairs throughout the district to instead pay for general operating expenses.  The misappropriated bonds were the major reason state lawmakers put MCS first under the control of a state emergency management team and a year later into the hands of Ball State University.

As part of that bill, the district was allowed to ask for a $12 million interest-free state loan. The Distressed Unit Appeals Board fielded the request Thursday. 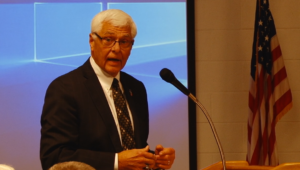 Interim chief financial officer Bob Coddington showed the board financial projections of where the district would be with and without the loan.  He says the state loan will help actually make the promised repairs.

“We need to get our buildings up to speed that we promised our community in 2014.  And that’s why we’re here.  We either can’t do the [general obligation] bond or we can’t do the Fieldhouse.  So, without the $12 million, this isn’t going to work.”

DUAB members unanimously approved the loan request.  It now goes to the State Board of Finance, which will ultimately decide whether to give MCS the money.  If the loan is granted, the district will begin paying it back in July 2020, taking no more than 10 years to do so.

Also a part of state legislative action was the offering of financial support while the district gets its finances in order.  DUAB members say it’s similar to financial support given to the now state-run Gary schools.  The board approved giving MCS up to $1 million through the next two fiscal years.