As many take a needed break over the holidays, resettlement of Afghan citizens into Muncie and the state continue.  As IPR’s Stephanie Wiechmann reports, more families will be making their home in Delaware County before the new year.

According to MARRC – that’s the Muncie Afghan Refugee Resettlement Committee – 10 families are now living in Muncie.  That’s 36 total Afghan citizens, with about half being children under the age of 18.

And committee spokesman Tony Sandleben says Muncie will welcome two more families in the next week-and-a-half, before the end of the year.

That comes as officials at Indiana’s Camp Atterbury say about 2,500 refugees are still waiting to be settled as of late last week.  Roughly 7,200 Afghans lived in temporary housing on the Edinburgh base.  The state says fewer than 150 of them have settled in Indiana.  And Indiana hopes to wrap up resettlements sometime in January.

In Muncie, as resettlements continue, the Muncie Human Rights Commission, in a statement, says the city has a “moral and ethical responsibility to support these families” after the risks they took to help US military and humanitarians in Afghanistan.

MARRC has been fundraising this fall with a goal of fully supporting resettled families in Muncie for their first six months.  The committee has said that will cost $10,000 per family.  At a meeting this week, MARRC reports it has raised $124,000 toward that goal. 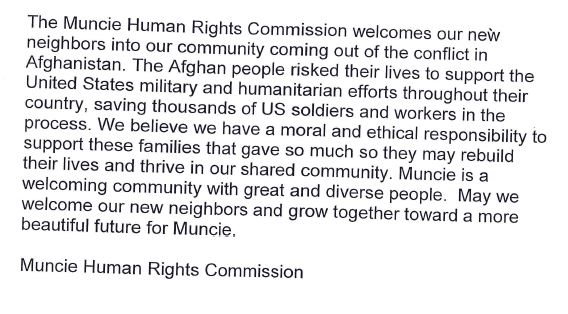 A statement from the Muncie Human Rights Commission, December 2021 (Provided)