Next month, there will be no school “emergency manager” in Muncie for the first time in two years.  After two legislative bills regulating the future of Muncie Community Schools, an emergency management team that spent time “righting” the district’s financial issues is leaving when its contract is up.  It’s putting the district in the hands of a local university and a new superintendent.  As IPR’s Stephanie Wiechmann reports, the team’s leader thanked the community at a school board meeting and gave advice to whomever comes next.

That’s Administrator Assistance co-founder Steve Wittenauer.  He and “the other Steve,” on-site emergency manager Steve Edwards, have been the faces of emergency management at Muncie Community Schools.

Wittenauer says when the team first started its relationship with MCS, the state Distressed Unit Appeals Board gave them three goals in six months. 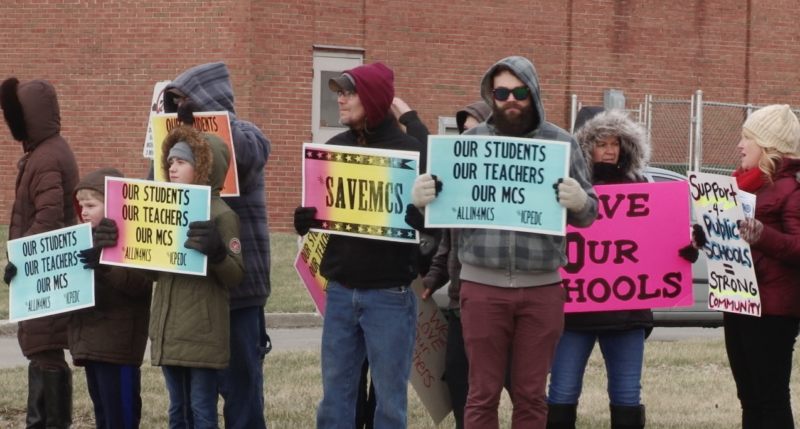 File Photo: A small group of rally-goers demonstrate outside of a school board meeting. (Tony Sandleben)

“We need to settle a teacher’s contract.  We need to give a clear financial picture of where Muncie was.  And we had to market the buildings.”

Once those goals were met, the district’s $18-20 million deficit was made public, and AA was put in full control of the district, Wittenauer says his team had to make the hard decisions that not every school superintendent or board wants to make.  But AA had an advantage.

“We can come into a situation and be objective.  We don’t have to worry about a three-year contract.  We can say what we think we need to say and make the recommendations we need to make.”

Wittenauer says his team’s success came in partnering with community organizations, including Ball State University by a law passed in 2018 that made the university the next steward of MCS.  And, there was the matter of a $12 million loan granted by the state legislature to pay off misappropriated building repair bonds.

“Also want to thank the legislature for giving us $12 million to help us right the ship.  Couldn’t have done it without them.  In fact, Paul [Pfledderer, retired business manager], when we first decided to apply for this job, said, ‘Witt, I’m not going over there unless we’re assured of $10 million,’ cause he knew how bad we were off.”

The team’s time at MCS wasn’t all smooth sailing, though.

“About the first day we were here, I was in front of the cameras talking to all the Indianapolis TV stations about the transportation problems we had here.”

The district had to quickly close for two days after the first day of the year in 2017 because of massive problems with its new bus carrier.

Steve Edwards agrees that was a surprise.

“I think we remedied that situation, yeah.  There was a lot of – well, not a lot.  There were several shocking issues that were difficult.” 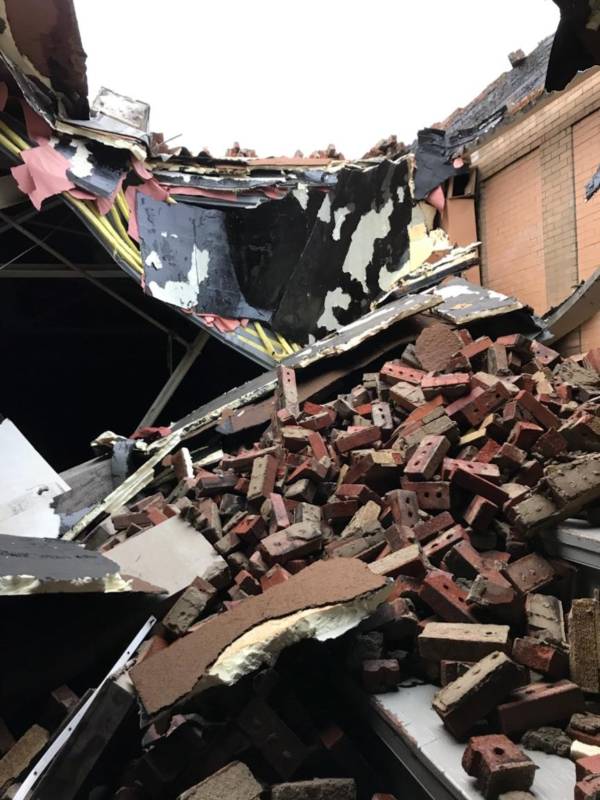 A hole in the Fieldhouse’s roof after a rare Muncie tornado. (Photo provided by MCS.)

Like the tornado.  In November of 2017, the first confirmed tornado to touch down in Muncie in 150 years did major damage to the Fieldhouse, Central High School’s historic gymnasium.  Although, Wittenauer says that one seemed like “divine intervention.”

“Without that storm tearing up our Fieldhouse, I’m not sure we would be in the position we are today to get the things done that we’re going to get done.  The floors are being done – pretty well done.  They haven’t gotten to the letters painted on it.  But it’s going to be – it’s going to be a showpiece again.  It’s going to be something we’re all going to be very, very, very proud of.”

The AA team stayed on longer than expected while the MCS school board searched for a new superintendent.  Board President Jim Williams says interviews are still being conducted and that new leader will begin sometime this July.

Wittenauer has advice for that person, too.  He wants to see continued partnerships with Muncie community organizations.

“And we need to start looking at these institutions that are close to us, like Ball State, Ivy Tech, [IU Health] Ball Hospital, the Chamber of Commerce, Purdue Poly[technic], Vincennes.  We need to be partnering with them many more times than when we have in the past.  They have so many things that they can offer our students.  We just need to reach out to them and try to figure out what can they provide for our kids.”

And he says the next superintendent might have to make new, tough decisions on what he calls the district’s “building situation.”  Right before the emergency management team came on, the district’s then-board closed three elementary schools, but opted to keep open Northside Middle School.  Ball State bought two elementary schools, and, surprisingly, Northside – leasing it back to the school district for practically nothing.  Wittenauer reminded the MCS board that that agreement isn’t forever.

“Very difficult decisions are going to have to be made.  With great leadership, you’ll figure out what has to happen, but that is something that, as we go forward, we need to take a look at our buildings and decide, ‘What are we going to do?’” 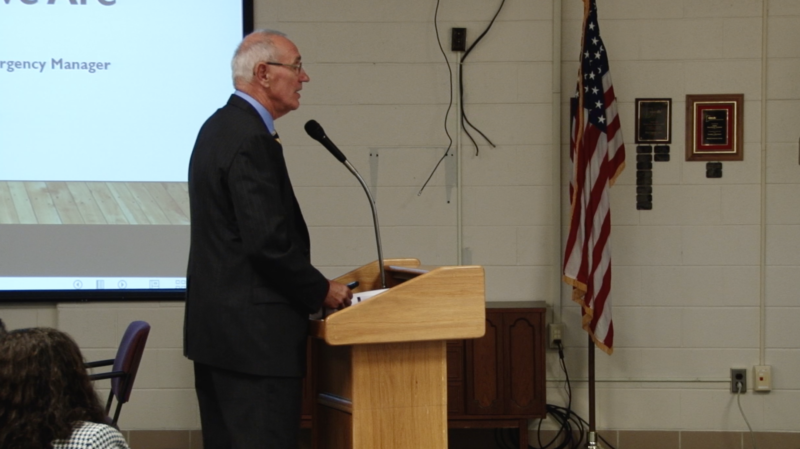 The new MCS superintendent will partner with Ball State, which, according to the Indiana General Assembly, has responsibility for the district through some undetermined date in the future.  Again, Steve Edwards.

“I think, moving forward, Ball State is the best answer to help the school system long-term.  I’m just proud to be part of it”

And by state statute, Ball State is working on a long term plan for MCS.  It’s due to lawmakers in June of 2020.